Russian-born flautist Zina Kaynarska is a well-known name in classical music. She is a winner of Ukrainian Woodwind Competition and a First Prize winner of International Chamber Competition in Poland. She studied at Odessa State Conservatory, one of the oldest Russian institutions for concert musicians and music teachers. 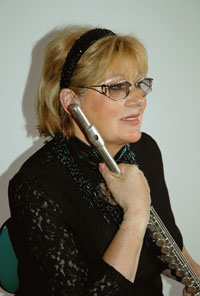 Zina started her performing career as a Principal Flautist in the Ukrainian Symphony Orchestra, and later became a member of various Baroque and Woodwind ensembles with which she frequently toured Russia and Europe. She successfully combines orchestral performance with musical tuition. She was awarded with Commendation Certificate from the Ukrainian Government for active work in the field of music and education.

Since arriving in Australia in 1996, Zina has given recitals at various venues in Sydney and Melbourne. She keeps teaching and has been granted AMTR Excellence Award 2004 “For Excellence in Teaching and the Running of a Music Teaching Business”. She regularly performs at the German Lutheran Trinity Church, Armadale Uniting Church and other venues. She took part in various performances for special occasions such as BMW recital series in Sydney and Melbourne and the Ceremony of Paul Volenberg Monument re-opening where she gave a solo performance of Ernesto Bloch’s “Abodah”.

Since arriving in Australia, Zina has performed numerous times for the Melbourne Jewish community in synagogues, aged care / nursing homes and art gallery and was awarded a Certificate of Appreciation by the National Council of Jewish Women of Victoria in 1999. 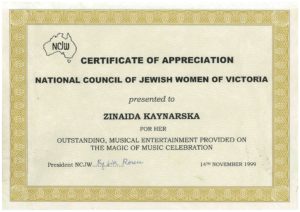 In 2012 Zina recorded a new CD of classical, popular and music from movies. This CD features “Sonata for Flute and Piano”, written for her by Australian composer Phillip Gelbach.